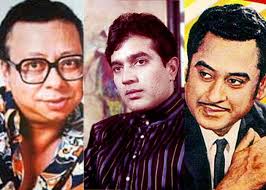 The humans of Bollywood and creative fields are a separate species altogether and function at diverse and complex emotional and mental levels than you can imagine. Loneliness is a creative paradox that every creative genius suffers from and Kishore Kumar was no different. With an extraordinary success as a celebrated musician, he was always a loner at heart coz nobody was capable of  understanding the depths of his tumultuous personal life that he told the journalist that his only best buddies are his trees.

A common heartache which most of the people in the industry share and yet swallow the pain despite its  being a common place reality that it is hard to find true friends in the industry. Which is such a painful reality to experience, given the fact that the industry binges on creativity, and expression, and to express yourself creatively only to be further misunderstood and get stashed in the web of desolation.

Kishore Kumar married 4 times, created evergreen dulcet music that you can never get bored of, that’s why its called evergreen. Nobody can bring quality and life into music that he did in most of his songs. This comic, eccentric legend for the rest of the world had sadness in his heart. Paranoid about not being paid, he also worked for free for Rajesh Khanna and Danny movies. He also sent money to the family of Bipin Gupta, actor-producer after his death. A host of eccentricities, made him a difficult person to deal with yet loved for his dedication and devotion for music. Who could guess what his heart was missing, not even the 4 women he married.

When you are born to create divine artwork through music and cinema, it unjust to judge a creative genius for his eccentricities and failed marriages. It takes a beautiful heart to create symphonic music that gave lyrics its life. People should stop matching personalities and behavioural traits to talent coz these two are separate things, and a hackneyed way to judge a person by what they see. Creativity is no science, creativity is divine with no structure and method. It takes a genius to dwell in randomness and put your heart on sleeves and be vulnerable knowing the ways of the world and still not lose your inner sanctum of following your divine path and true calling.

The discipline of creativity is an entire encyclopedia not for the logical mind, but for a heart that generates emotions so large than life in their intent, that the entire cosmos settles in them. It takes a genius to understand the bizarre, and the mist of obscure with clarity to create structured artwork through music and cinema.

P.S: People who are too sensible, you do not belong the creative field…..the blend of madness and creative genius is the prerogative of creatives.